NEW Best choice!
Out Of Stock

NEW Best choice!
Out Of Stock

The story of Adivasi Tribal people in a south indian forest becoming self reliant – again! Part 2

Currently we are dedicating a percentage of Pink Namaste's proceeds to supporting a vibrant, well established and growing organistation called ACCORD (Action for Community Organisation, Rehabilitation and Development) ACCORD was born in November 1985 to help the Adivasi community of the Gudalur Valley in the Nilgiris district of Tamil Nadu to take control of their own lives as they were being cheated and exploited and might soon have disappeared off the face of the earth, as is the fate of so many tribal populations worldwide.

We are proud to be developing our partnership with ACCORD with a perspective on future collaboration of developing trade and mutually beneficial exchange.

ACCORD began in activist mode to help Adivasis organise themselves in order to assert their rights - especially land rights. They chose young people who wanted to stop the exploitation. These young Adivasis became animators, awakening people to the realisation that exploitation was not an inevitable part of life, that to demand justice was THEIR RIGHT. That land was their BIRTHRIGHT. They went from village to village, urging the Adivasis to be united, to protect their land and to stand up to the people encroaching into their livelihood resources, however powerful these people might be, exhorting the Adivasis to be confident and fight the injustice.

This resulted in the formation of many village level Sangams - a name for the unity of the Adivasis. The village sangams started responding to issues of injustice and exploitation and helped the Adivasis regain their land. People started resisting.

A massive Land Rights Campaign was organised in the entire region, culminating in a protest demonstration by AMS in Gudalur on December 5, 1988. This was the first public display of defiance and show of solidarity by more than 10000 Adivasis. The issue of Adivasi land alienation and their struggle for human rights were emphatically articulated by the Adivasi leaders in the demonstration. 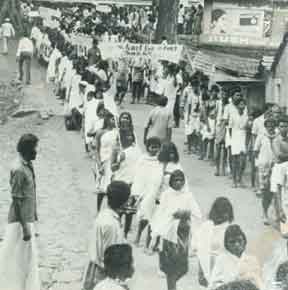 Suddenly they realised the strength of their numbers - and the value of their Unity. The village sangams helped Adivasis shed their fear of ‘powerful’ people - be it the non-tribal landowners or the Government officials. Till today, everyone in the Adivasi community considers this ‘freedom from fear’ as the biggest achievement of this movement.

Today, there are about 12500 members in the AMS spread in more than 200 villages in the Gudalur and Pandalur taluks of the Nilgiris district in Tamil Nadu.

The law enforcement agencies and the development machinery of the Government, the local population, and most importantly, all the Adivasis recognise AMS as the representative and identity of the Adivasi community here.

For a people who were primarily hunter-gatherers, the nationalisation of forests has meant starvation, disease and malnutrition. The economic situation of the Adivasi community had touched rock bottom. It was not a question of land alone. Even while organising the people for their political rights, the Adivasi activists of AMS were moved by the plight of their people and resolved to address the other problems facing the community. The village level discussions prompted ACCORD to initiate some ‘traditional’ development programs, along with the political activities.

Read about the development programs in our next blog!

We believe that we can be catalysts for change, doing what we love. It is time for new business models to replace the old.

Since 2004, Pink Namaste supports small cooperatives, fair trade and traditional art forms. We aim to use recycled and organic materials in our manufacture, wherever possible.

Completing the circle we support social and environmental projects in India. Up to date we have financed tailoring lessons for ladies near Mysore, training sessions in organic farming for tribal people in Karnataka, and are currently supporting the making of an organic garden farm near Mysore.
We believe that business can be fun, creative and benefit everybody involved, from producers and managers through to customers.

Help us to grow the circle of love by enjoying our products, becoming our friend and telling people about us.

We live Yoga and we also organize Yoga workshops and fund-raising events.